Embraer’s future passenger turboprop promises to be the most global project ever developed by the Brazilian manufacturer. That’s what the company’s Chief Commercial Officer, Martyn Holmes, revealed this week during IATA’s annual meeting in Doha, Qatar.

“We are talking to a number of potential partners around the world and some of those are in India. It could be industrial and/or financial partnerships,” the executive told the Economic Times of India.

The Asian country has been pointed out as one of Embraer’s potential partners, not only in relation to the turboprop, but also the C-390 Millennium military freighter.

Embraer and the government of India have been talking about a possible order for the aircraft, which would include some kind of industrial partnership with companies in the country.

Unable to fund the entire turboprop project, Embraer has been looking for companies around the world to share the investment. Another possible partner could come from South Korea, reports say.

The latest plan is for the aircraft, capable of carrying 70 to 100 passengers, to launch in early 2023 and enter service in 2028, Holmes said. The preliminary design of the turboprop envisages a fuselage section shared with the E-Jets and tail-mounted engines.

UK low-cost airline Jet2.com has announced a new deal with Airbus, this time to take delivery of 35… 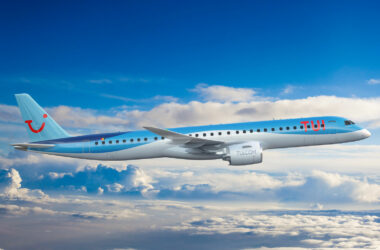