Similar to the ATL-100, unveiled by the company in 2018, the new plane is larger and pressurized, with retractable landing gear, and capacity to transport up to 40 passengers in a commercial configuration or 4 tons of cargo – whose rear ramp for loading bulky objects .

The ATL-300 is in theory a rival to the ATR 42, the smaller version of the best-selling regional turboprop on the market. The aircraft’s layout features a T-tail, wing-mounted engines and winglets to reduce drag.

The company also highlighted its ability to operate at high altitudes, on runways located at an altitude of 3,000 meters. The ATL-300 will also be able to land and take off at a distance of just 800 meters on semi-prepared or even unprepared runways, including sharp approach angles.

Because of this, Desaer considers the ATL-300 a dual aircraft, capable of meeting both commercial demands such as regional and cargo flights, as well as military demands in cargo transport, paratroopers, soldiers or aeromedical evacuation missions.

The main details of the project are still kept confidential, but the company says the new plane will be attractively priced at around $21 million and will share systems being developed for the ATL-100.

Desaer is preparing to announce the start of construction of its headquarters in Brazil in 2022. It expects to generate around 300 high-skilled jobs during the design phase and a total of 1,300 jobs throughout the production chain.

According to the CEO of Desaer Evandro Fileno, the first flight should take place in 2026 and entry into service in 2027.

The name of the plane is new, but the problems remain the same. According to Japanese media reports,… 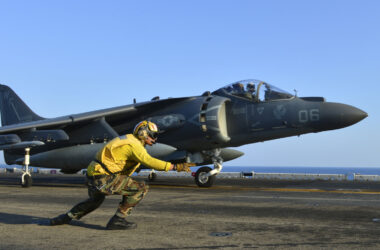 The Harrier attack aircraft emerged in the late 1960s with a bold goal, offering vertical take-off and landing…