Ricardo Meier
0
0
0
0
In an interview, the Air Force Commander alleges that budget constraints would cause deliveries of the original 28 planes to be extended until 2036
Total
0
Shares
0
0
0
0

The controversial reduction in the order of 28 KC-390 airlifters announced by the Brazilian Air Force (FAB) last year is close to an agreement with Embraer, its commander told a local newspaper.

According to Lieutenant Brigadier Carlos de Almeida Baptista Junior, the Brazilian Air Force only has a R$ 1 billion ($190 million) annual budget for the KC-390 program. “Buying 28, we will only receive them in 14 years, it makes no sense for us or for Embraer. There are obsolescence processes to be analyzed”, explained the Air Force commander.

The Brigadier also made it clear that the current administration prioritizes the military force and not the development of national industry, as occurred at times in the past. Baptista, however, acknowledged that the FAB would need the 28 KC-390s “or even more”.

According to the military, the Air Force has air defense as its main mission, hence the order for 36 Saab Gripen fighter jets is the most important ongoing program.

By the end of 2021, FAB had received five Embraer military transport aircraft. It is estimated that the order can be reduced by up to 13 KC-390s, making the multi-role jet have only 22 firm orders – in addition to Brazil, Portugal has an agreement for five aircraft and Hungary, another two aircraft. 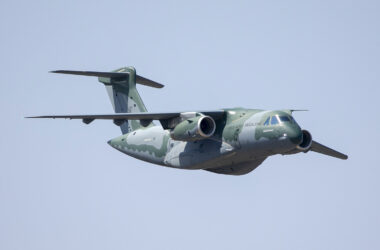 Embraer continues its offensive to obtain new contracts for the C-390 Millenium, airlifter rival to the C-130 Hercules…