C-390 completes firefighting certification, says Embraer MAFFS II system used in the multi-role aircraft can discharge up to 11,300 liters of water in fires Embraer announced on Monday that it had successfully completed the tests for the certification campaign of the Modular Airborne Fire Fighting System (MAFFS II) integrated into the C-390 Millennium multi-role aircraft. The tests were conducted from the facilities in Gavião Peixoto, where the aircraft is assembled. According to Embraer, the MAFFS II can discharge up to 11,300 liters of water, with or without flame retardant. The system, supplied by the US company United Aeronautical Corporation, consists of five water tanks and two launch tubes that project through the side doors at the rear of the aircraft. The equipment is an evolution of the MAFFS from the same supplier, which is used by the Brazilian Air Force (FAB) in the C-130 Hercules turboprops in firefighting missions. The MAFFS II is designed to be compatible with the C-390’s Cargo Handling System. Therefore, it can be quickly installed or removed from the aircraft’s cargo hold. On board, the equipment requires only electrical energy from the plane to work. The C-390 is the first airlifter in its class equipped with fly-by-wire controls, which according to Embraer “reduces the workload of the crew in firefighting missions, improving the efficiency of the operation”. The manufacturer also highlights the speed of the aircraft, which “guarantees a shorter transit time and projection of long-distance capacity, for rapid fire containment”. The FAB did not say how many MAFFS II kits will be acquired for use in the KC-390. The force currently has two first-generation MAFFS systems for C-130 application. The C-390 can discharge 11,300 liters of water over fires (Embraer) 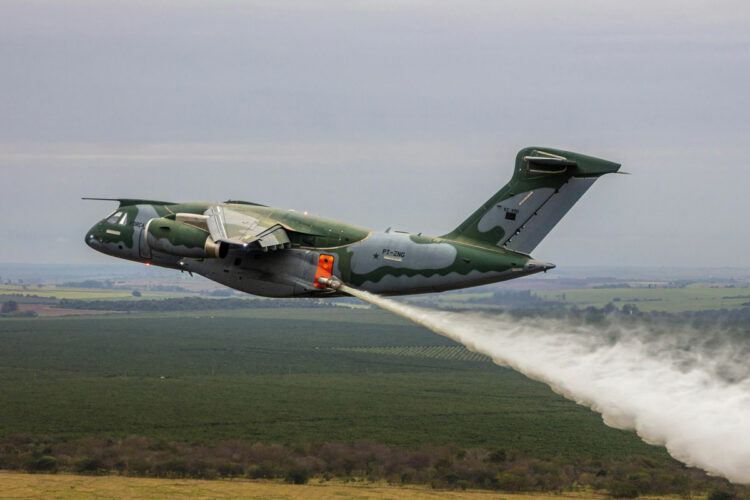